…it’s bad enough that the faultline exists; but it’s worse when you’re clueless where. 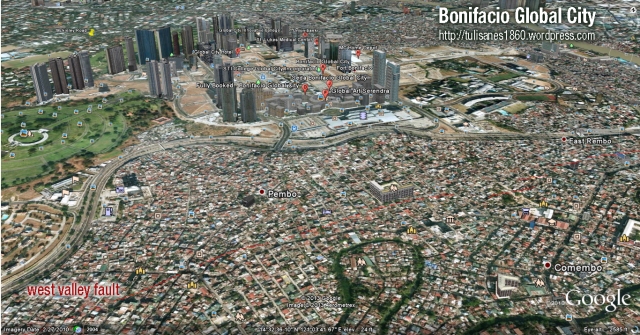 Please click on the image above to OPEN, then click again to ZOOM-IN. Use browser scrolls to NAVIGATE.

i really appreciate your effort by informing the public/us about this. i myself have made investments in north bonifacio global city (veritown area by federal land) and ortigas greenfield (edsa central). the faultline issue never crossed my mind when i made my investments because i was not aware. i only came to realise the danger when i read an article about bgc gas pipeline (after serendra blast) sitting atop a faultline and my search has led me to your site.

anyway, as mentioned above, id like to know sana which between the 2 properties is safer. both are pre-sold naman so madali ko pa sya mabibitawan if ever. i am already planning to move back to manila in the near future. god forbid na mangyari nga ang kinakatakutan na earth quake sana naman hindi macompromise ang safety ng family ko if i could make informed decision right now while i still can. appreciate if you could advise.

Hi,
Is it safe to buy a mid-rise condo near Acacia Ave, Taguig City, Philippines. Location is good and we’re considering investing but its near the east valley faultline. What are the dangers of a magnitude-7 and up earthquake to the east valley side?
Also, why are they still building high-rise condos in Fort Bonifacio? Does this mean its safe if you are not on top of the actual faultline? I hope you can take time to reply, appreciate it. Thanks

I would kindly ask for your help regarding earthquake fault lines. My question is: what areas in Fort Bonifacio and Mckinley Hill will be most affected when a big earthquake occurs? Aren’t these areas at bedrock? My daughter works in a building along Upper Mckinley Road. I hope you can enlighten me.

Thank you and God bless!

Hello, we bought a condo unit at veritown fort bonifacio global city, is this area part of the fault line? If not, how far is it from the fault line?

This blog was started in 2013; however, it actually began in 2010 but got corrupted and backups of the original helped to restart the present blog. Prior to 2010, i was emailing people Google maps with the fault trace. But it was in 2005 when i assembled my first map. In 1990, i got ahold of a photocopy of a tabloid size, black and white map when the former Phivolcs head, the late Ricardo Punongbayan gave an earthquake awareness seminar after the July 16 earthquake. i put away the map inside a cannister and rediscovered it 15 years later when i was going through my old stuff. Instantly, sirens went off inside my head and took stock of the situation on what i had: Windows in my computer (DOS ruled PCs 15 years earlier), Adobe Photoshop, a powerful image scanner and, most of all, a coffee table book of tiled large maps of Metro Manila. Fancying what i could accomplish with technology and a 15 year old map, i put my competency at work and scanned images and assembled them on my desktop computer. Lo and behold, even after checking the work several times, i got the jolt of my life when i discovered my rented house was actually sitting on top of a fault line! Not long after, i evacuated and resided far from any faultline. At the time, i was probably one of the few (not that i know anyone else) who assembled a map of the fault line. What were the chances that i assemble a fault line map as a weird activity and suddenly find myself and my family at risk and unaware that a silent, deadly fault line ran directly under our house. It was an epiphany! Since then i knew what i had to do, and God brought everything to pass easily and smoothly. However, truth to tell, creating the maps was so nerve-wracking and I could not have done it all if I weren’t a bit of obsessive-compulsive in me. For many months, everyday I had to devote about four hours piecing together up close snapshots of many topographical maps and later google maps to create this blog. I could say i literally spent tens of kilometers after kilometers assembling detailed maps and from the experience, I made many observations that I made posts of. The gratifying moment came when Phivolcs and the NDRRMC maybe through an influential follower of my blog, I suspect, launched a media blitz with campaign to protect the welfare of students whose schools, and many they are, are in the path of fault lines. I knew my work became basis of this and I couldn’t help but feel that i had accomplished at least one of my life’s purpose. i may just be accomplishing God’s will; but then again, maybe not. Only God knows. “There will be great earthquakes, and there will be famines and plagues in many lands, and there will be terrifying things and great miraculous signs from heaven.” -Luke 21:11 “At that very hour there was a severe earthquake and a tenth of the city collapsed. Seven thousand people were killed in the earthquake, and the survivors were terrified and gave glory to the God of heaven.” -Revelations 11:13 “Nation will rise against nation, and kingdom against kingdom. There will be famines and earthquakes in various places.” – Matthew 24:7 * * * * * * * * * * * * * * * * * * * * * * * * “Therefore will not we fear, though the earth be removed, and though the mountains be carried into the midst of the sea;” -Psalm 46:2 * * * * * * * * * * * * * * * * * * * * * * * *
View all posts by Stuvwx →
This entry was posted in Earthquake, Natural Disaster and tagged bonifacio global city, disaster, earthquake, east valley fault, epicenter, EXPOSING the Marikina Valley Faultline System, faultline, faultlines, fort bonifacio, global city, large earthquake, list of subdivisions, magnitude, marikina, megaquakes, Natural Disaster, philippines, phivolcs, safety, taguig city, the fort, tulisanes, west valley fault. Bookmark the permalink.