TAAL VOLCANO & THE BIG ONE 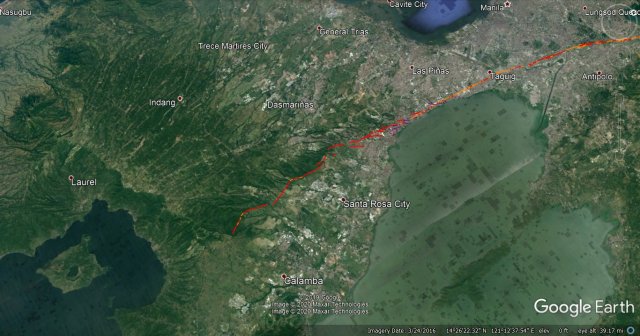 Not to stir up panic, Tulisanes is calling for VIGILANCE more than ever.

As Phivolcs announced this morning to prepare for the worse with the Alert Level 4 status given to Taal Volcano, i find it relevant to share something just as worse, if not worser.

My research once came upon a sole reference that, though mentioned just in passing, for me it stood out immediately. Where an unnamed geologist theorized the 7.2 magnitude earthquake expected from the much-anticipated West Valley Fault movement COULD BE triggered by massive volcanic activity from the Taal Volcano.

It made sense. Because the long stretch of the West Valley fault trace, on one end of it, stops in the Laguna area. However, if one were to extend the trace further in ones imagination, much like one would with a sight line from a poised billiard stick, in UNCANNY COINCIDENCE it appears, the West Valley Fault points to the Taal crater as if it was some billiard pocket waiting in the distance.

A strong eruption of the Taal Volcano’s just might create a rip large enough to bring about The Big One.

This blog was started in 2013; however, it actually began in 2010 but got corrupted and backups of the original helped to restart the present blog. Prior to 2010, i was emailing people Google maps with the fault trace. But it was in 2005 when i assembled my first map. In 1990, i got ahold of a photocopy of a tabloid size, black and white map when the former Phivolcs head, the late Ricardo Punongbayan gave an earthquake awareness seminar after the July 16 earthquake. i put away the map inside a cannister and rediscovered it 15 years later when i was going through my old stuff. Instantly, sirens went off inside my head and took stock of the situation on what i had: Windows in my computer (DOS ruled PCs 15 years earlier), Adobe Photoshop, a powerful image scanner and, most of all, a coffee table book of tiled large maps of Metro Manila. Fancying what i could accomplish with technology and a 15 year old map, i put my competency at work and scanned images and assembled them on my desktop computer. Lo and behold, even after checking the work several times, i got the jolt of my life when i discovered my rented house was actually sitting on top of a fault line! Not long after, i evacuated and resided far from any faultline. At the time, i was probably one of the few (not that i know anyone else) who assembled a map of the fault line. What were the chances that i assemble a fault line map as a weird activity and suddenly find myself and my family at risk and unaware that a silent, deadly fault line ran directly under our house. It was an epiphany! Since then i knew what i had to do, and God brought everything to pass easily and smoothly. However, truth to tell, creating the maps was so nerve-wracking and I could not have done it all if I weren’t a bit of obsessive-compulsive in me. For many months, everyday I had to devote about four hours piecing together up close snapshots of many topographical maps and later google maps to create this blog. I could say i literally spent tens of kilometers after kilometers assembling detailed maps and from the experience, I made many observations that I made posts of. The gratifying moment came when Phivolcs and the NDRRMC maybe through an influential follower of my blog, I suspect, launched a media blitz with campaign to protect the welfare of students whose schools, and many they are, are in the path of fault lines. I knew my work became basis of this and I couldn’t help but feel that i had accomplished at least one of my life’s purpose. i may just be accomplishing God’s will; but then again, maybe not. Only God knows. “There will be great earthquakes, and there will be famines and plagues in many lands, and there will be terrifying things and great miraculous signs from heaven.” -Luke 21:11 “At that very hour there was a severe earthquake and a tenth of the city collapsed. Seven thousand people were killed in the earthquake, and the survivors were terrified and gave glory to the God of heaven.” -Revelations 11:13 “Nation will rise against nation, and kingdom against kingdom. There will be famines and earthquakes in various places.” – Matthew 24:7 * * * * * * * * * * * * * * * * * * * * * * * * “Therefore will not we fear, though the earth be removed, and though the mountains be carried into the midst of the sea;” -Psalm 46:2 * * * * * * * * * * * * * * * * * * * * * * * *
View all posts by Stuvwx →
This entry was posted in Uncategorized. Bookmark the permalink.

3 Responses to TAAL VOLCANO & THE BIG ONE